Two and a half years in, I think I must be close to being the world expert on wearing Invisalign.

I was undoubtedly the most complicated case that my orthodontist had ever taken on when I started, and I believe I’m still his longest running case. Most of his patients swan in and out of his offices every few weeks, visiting him for six months to a year, and then wander off again, retainers in hand, to carry on their lives the same as before; just a little bit better looking. 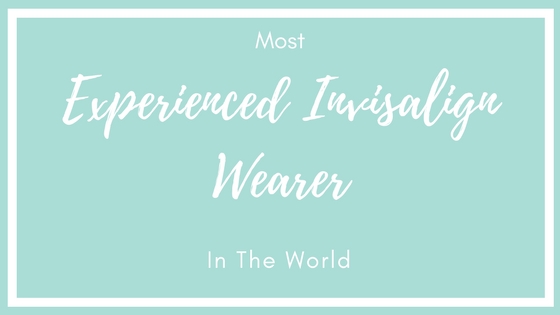 Not me. As I amble into the surgery, apologies in hand about whatever the current month’s misdemeanour is (forgetting to change the aligners on the right day, mostly) he sighs resignedly. It isn’t that I want to make my treatment longer than it is, or that I can’t bear to end our six weekly visits, it’s just that after all this time the thrill of changing to the next set is almost gone and some weeks when I’m supposed to change aligners, I simply forget.

The good news about this, I suppose, is that it goes to show exactly how comfortable Invisalign really are. I don’t think about them at all these days, my mouth is as comfortable with them as without, in fact, sometimes when I’m not wearing them my mouth almost feels strangely empty. And therein lies the problem really. I need to think about them just a little bit.

This visit, as I confessed that I had again slipped an aligner behind, so that I only needed two, not three new aligners to take me through to my next appointment, my orthodontist shook his head and said “You’d have been finished if you were in metal braces, you know.”

The truth is though, as I told him, that I would rather wear Invisalign for 10 years than wear metal braces for one- a sentiment with which he heartily agreed. To me, there is simply no contest.

And whilst I sometimes forget to change, and wear my Invisalign sets for three weeks instead of two, I take comfort from the fact that at least I wear them too much, and not too little.

Of course, there’s a very good reason why my treatment has taken so long; we always knew that it would. My orthodontist made it very clear from the beginning that I was right on the boundary of being suitable for Invisalign treatment. You can see the offending tooth that has meant that I have been pushing at the limits of Invisalign’s capabilities on my original clincheck:
[youtube]http://www.youtube.com/watch?v=XPodnxNMaoI[/youtube]

Whilst my upper teeth are now in retainers, and my lower teeth look almost perfectly straight from the front, that wayward tooth on the lower arch is still there, strewn across the bottom of my mouth. I’m currently about five aligners short of the gap being large enough to start moving it into place, and I can’t wait to try.

My orthodontist is not by any means convinced it will ever move, he fears it is somehow fused to my jaw bone or in some other way completely stuck, and that ultimately I may have to simply remove it. I however remain deliriously optimistic; my treatment has gone so well and so easily this far that I’m simply not ready to concede that anything could go seriously wrong at this point.

14 thoughts on “The Most Experienced Invisalign Wearer In The World™?”