When I first started Invisalign, the time when I would finally be wearing retainers seemed like such a distant prospect that I barely even allowed myself to give it a second thought. In my imagination, a day when I would have good teeth was a day that I dreamt about, but not one that I ever REALLY thought might come.

My friends, that day is here.

As I mentioned in my last post, my upper teeth have now been happily ensconsed in clear retainers for some time, and I thought those of you still on your journey to get that to that point, might like to see what the different retainers look like.

My orthodontist has chosen Essix retainers for me, and ever one to question his professional judgement, I did a fair amount of research as to what I think the most comfortable and unnoticeable clear retainers are, ready to fight battle if need be.

Essentially there are two main options when it comes to retention following adult braces. The bad news is that either way, you need to wear retainers forever. Not forever, as in, for ten years and then your teeth will grudgingly conform and stay elegantly upright in their new, more attractive positions. Nope, this kind of forever is really the forever kind. The kind of forever where fifty years of wearing retainers, followed by a week long slip up will still mean that your unobliging teeth will start to dance back to the position they were in before you trussed them up in Invisalign.

So, retainers fall into two main camps. Permanent retainers and removable retainers, both of them forever retainers.

When I first did my trawl around the various orthodontists seeking an opinion about my teeth, retention was something that was often mentioned to me. I was shown various pictures of retainers, and the types that different orthodontists preferred, and quickly came to a realisation.

The fixed retainers that I was shown were mainly along the lines of those shown below and were of a permanent wire connected to the back of the teeth that holds the teeth firmly in place, not allowing them to shift : 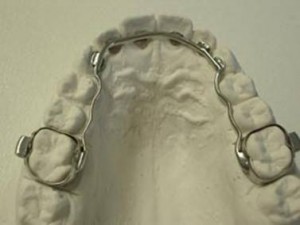 The benefits of these retainers, according to the orthodontists that I saw, are that they are a set and forget kind of a deal. Once they are on, you don’t have to worry about lost or forgotten retainers, and your teeth stay in place as long as the retainer is correctly attached. The downside of such retainers is that they are fiendishly difficult to keep clean, and obviously, they ain’t that pretty when you open your mouth wide.

The good news, for someone as averse to metal in their mouth as I am, is that there is also the option of removable clear retainers, which are worn only at night. These are divided into the type that your orthodontist (or dentist) can make for you, and those that come from Invisalign themselves, known as Vivera. Both look, to all intents and purposes, very similar to an Invisalign aligner.

My orthodontist, when enduring his regular eight weekly grilling of a thousand of my stupid questions, told me that there are two reasons why he doesn’t use Vivera. Firstly, they simply weren’t available here in Australia at the time of asking and very similar ones could be made more cheaply and easily here. (A pretty good reason, I’ll have to concede) Secondly, he says that once you order your Vivera retainers from Invisalign your case is seen as effectively closed. He often has patients who decide not to proceed with a refinement or final tweak and then, several months later, change their minds. Using Vivera would remove from him the option of ordering another refinement free of charge, as they would be treated as a new case, with a correspondingly large new bill.

For those who are certain that their treatment is complete though, Vivera certainly sound like a great option. As long as you keep up your subscription to them you receive a nice shiny new set of clear retainers every three months. These can be made either in the shape of your last set of Invisalign, or, if you weren’t an Invisalign patient or if your teeth have been crowned or filled, can be made from a new molding. This gives you the reassurance that as long as the retainer still fits your retainer isn’t changing shape and that your teeth are actually stable and in the position that they were at the end of your orthodontic treatment. There is an interesting review of an orthodontist wearing Vivera here for those that are interested in this system.

In my case, my orthodontist favours another alternative for clear retainers, an Essix retainer. 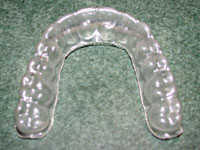 Whilst this might look fairly similar to an Invisalign aligner, in truth they feel quite different to wear. Whereas Invisalign seem finely crafted and take in the shape of every tooth and gum line, these seem more like Invisalign would be were they crafted by a five year old. The shape and the general appearance are the same, but the execution looks and feels altogether more clumsy. Peering closely at my clear retainer I can see that it does have the individual shape of my teeth molded into it, but that they are not as distinct as they would be on an Invisalign aligner and cover part of my gum as well as my teeth.

Whereas Invisalign feel that they fit very closely to the teeth, these feel larger and thicker in the mouth. However, that isn’t to say they aren’t comfortable. I would equate the putting in of my retainer each night as similar to putting on a pair of comfy old bed socks. Not the most attractive thing in the world, but comfortable and somehow comforting. Comforting too to know that these retainers can be made cheaply (well, relatively- this is orthodontics after all) and easily by any general dentist in a couple of days so losing them isn’t the issue that losing an Invisalign aligner might be. Also, they are doing a fantastic job of keeping my teeth exactly where they were when I completed my treatment, which has to be a good feature in a retainer.

In reality the right retainers will be down to personal preference, but as someone who loves the fact that Invisalign are removable, and just can’t face the prospect of a metal wire permanently fixed to my teeth, Essix clear retainers are perfect for me.

Which is a good job given the amount of time we’ll be spending together.

Which retainers will you be using or have you worn, and how did you find them?